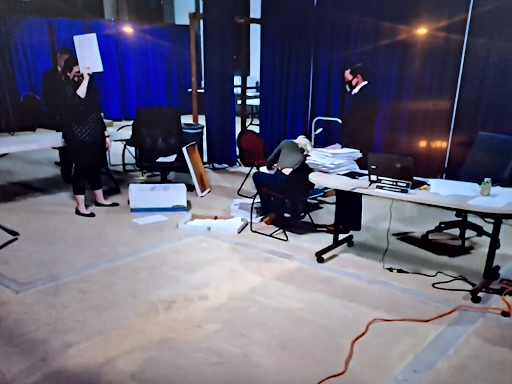 It is now over ten days since Election Day but Pulaski County is still trying to get their absentee ballots and provisional ballots totaled.  It is a tricky process to begin with as the amount of absentee ballots have grown several time over due to COVID fears.  Add to this that the Commission staff work for Democratic Pulaski County Judge Barry Hyde and not the Republican controlled Election Commission.  There is a clear distrust with a long history.  A staff member has even flied a police report against a commissioner for entering his office this week.

Such was the setting for a meeting on Friday at 5:00 pm scheduled to certify the election result now that all military ballot should be in for Friday's due date.  But the meeting went sideways...very sideways.

The meeting began with Commissioner Stahr and Chair Gomez wanting to bring in Saline County Election Commissioner Jamie Clemmer to help.  This angered Director of Elections Bryan Poe who stormed out of his room saying "I'll be in my office if you need me." After a long pause, Poe finally returned and by this time Clemmer had arrived from Saline County.

But things got worse from there.  Poe then reported the number of provisional ballots count as voted by the Commission last night.  Only problem is that the numbers did not match.  It seems about 23 ballots had gone mission.  Commissioner Stahr pressed Poe saying "Where are the ballots we approved?"

After a recess, Commissioners began going through boxes of ballots that had been approved by the Commission to be counted and they began discovering that many of these ballots were not showing up on their list that should have been counted.  Several hours of searching for these ballots began with a new ballot that should have been counted turning up every few minutes.

Director Poe admitted that he (1) counted ballots that had been disallowed and (2) lost ballots that were supposed to be counted.

With all confidence lost the Commissioners began going through box by box of ballots continually finding errors.  "Sometimes people make mistakes," was the defense offered by Poe.

Commissioners spent twelve hours of counting before finally reaching the end.  Goofiness abounded as tired Commissioners and staff get reinforcements from food and caffeine and Christmas music late into the night.

Around 2:30 am, the Commission finished their search. They came back about 3:00 am for another round for about an hour. They approved the handful of provisional ballots that they found and they moved on to certifying voting sites for the runoff elections.

What is the rush?  The election is required to be certified by the Commission on Wednesday, November 18 (Ark. Code § 7-5-701(a)(1)) and they expect house district 32 and/or house district 38 will have a recount do to the close margins.  The first unofficial count has to be made so the recount can be requested if it is desired by the campaigns which seems likely.

Expect recounts in both these race and lots more drama ahead.