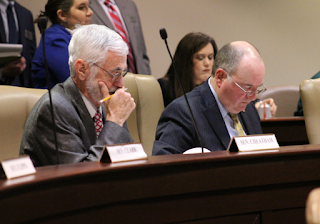 Going into this year's election, the Arkansas State Senate has 26 Republicans and 9 Democrats.  In all likelihood, this will change little.  Only 8 of the 35 seats have a general election with a Republican versus Democrat on the ballot.  Republican incumbents face challenges in four districts, Democrats in two, and there is one open district in Little Rock where Democratic State Sen. Will Bond did not run for re-election.

Three of these Senate races are in spread across south Arkansas districts that were once considered Democratic strongholds but voters have shifted increasingly to the Republican ticket.  It was only eight years ago that conservative Democratic Congressman Mike Ross was consider unbeatable in the vast south Arkansas Fourth Congressional District.  Now Republican Congressman Bruce Westerman is running with little threat from Democratic challenger William Hanson.

Perhaps the biggest test for Democrats is State Sen. Bruce Maloch's re-election in district 12.  Cut from a mold similar as Ross, Maloch has distinguished himself as a conservative Democrat and he has the record to back in up.  He is the only Democrat endorsed by Arkansas Right to Life.  He is well known, well liked, and well funded.  His campaign finance report shows that he has raised $147,092 most of which has been spent on Little Rock communication firm The Friday Group.

The test for Maloch is simply the make-up of the district which voted overwhelmingly for Trump in 2016.  State legislative analysis Chaz Nuttycombe with CNAlysis follows state legislative races across the country and gives Maloch about a 40% chance of holding the seat.

"Maloch is vulnerable because he’s in a district won by Trump by 20 points. Maloch has never even won his district either, as no Republican has ran against him. In the Trump era, blue dogs in Trump areas are on a rapid decline. They’ve always been disappearing every cycle and Maloch probably won’t be an exception. He’s winning the money race though so we only have him as a slight underdog, he’s got about a 40% shot to win I’d say," says Nuttycombe.

The Republican candidate by contrast is not well known nor well funded.  His campaign reports only raising $12,840 with his only expense to date his $7,500 filing fee.  He has started sending out mailers - which have been heavily criticized by some of Maloch's Republican State Senate colleagues - although this expense will not show up until the next financial filing.  And here is a mystery.  So far no one is claiming credit for these mailers.  I reached out to three of the leading Republican consultants in Arkansas and none of them say they are working on Beckham's campaign. (Most observers thought the mailers were from Ken Yang but he tells me he did not do them and is not working on Beckham campaign.)

Another south Arkansas Democrat playing defense is State Sen. Eddie Cheatham but unlike Maloch, Cheatman faces a well funded Republican opponent.  Ben Gilmore - who until recently worked at the Lieutenant Governor's office - has raised $137,059 for his race compared to $83,284 for Cheatham.  Gilemore's campaign is run by his well connected brother's political firm Gilmore Strategies who formerly worked for Gov. Hutchinson office.  Cheatman is used long time Democratic leaning Linda Napper for his campaign.

Nuttycombe predicts Cheatham's chances are even worse that Maloch's describing him as a "dead man walking."

"Cheatham is going to get Blanche’d," said Nuttycombe. "He barely won in 2012 and his district is about as Republican as Maloch’s - perhaps a little bit more Republican. He would have lost in 2016. He is not doing hot in the money race like Maloch is either. There’s no scenario where Cheatham survives; he is the most likely Democrat incumbent in any state legislative race in the country to lose this November."

On the Republican side, State Sen. Trent Garner is defending his seat against Democratic challenger Keidra Burrell.  Garner holds a huge money edge raising $163,502 compared to Burrell's $38,797.  Democrats barely held up to this district in 2012 with Bobby Pierce wining by only about 300 votes. Pierce then lost his re-election in 2016 to Garner by over 2,800 votes.  It would take a huge shift away from the Republican trends for Garner to lose this seat which seems unlikely.

Can Democrats still win in the south Arkansas?  These three races will tell us.