The National Education Association Advocacy Fund has an ad out supporting State Sen. Joyce Elliott in the hotly contested Second Congressional District race in Central Arkansas. The ad is good bio ad highlighting her past particularly as an educator in Arkansas.  The only problem - they repeatedly misspelled her name as "Joyce Elliot."

While advocacy groups do not coordinate with the official campaign - and clearly did not in this case - it's odd that a teachers' group would not know how spell the name of a candidate they spent thousands of dollars supporting.

Even more odd than this is an ad from Elliott's campaign discussing the 2017 tax cuts.  The claim made in this ad and made directly by Elliott in the recent debate on Arkansas PBS is that the 2017 tax cuts exactly raised taxes on the middle class.

"Let's talk about what's tough for Arkansas families. The 2017 tax cut was an absolute giveaway to the richest people in this country. It created a permanent tax increase for the middle class," claimed Elliott in the debate and reiterated in a tweet promoted by the Democratic Party of Arkansas.

What on earth is she talking about?  Her ad reveals a bit about where she is getting this.  The ad points to a December 18, 2017 study from the Tax Policy Center on the Tax Cuts and Jobs Act of 2017.  The problem here is that the study refutes Elliott's claim. 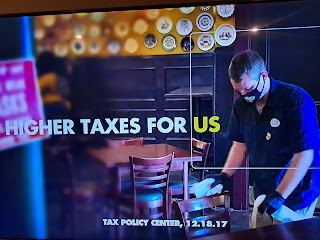 "Compared to current law, taxes would fall for all income groups on average in 2018, increasing overall average after-tax income by 2.2 percent," reads the study.

Did you catch that - "all income groups." That means it cut taxes for everyone - including the middle class.

The only plausible connection to Elliott's claim is a warning in the study that the tax cuts expire in 2027 after which the study finds that "low and middle-income taxpayers would see little change."  In other words, after the tax cuts expire, taxes will go up as there would no longer be tax cuts in place.

So here is where Elliott's logic gets really weird.  She is campaigning against the tax cuts saying they are a tax increase and saying she wants to repeal them.  Instead the tax proposal supported by her party would raise taxes by $2.4 trillion over the next decade according to another study by the Tax Policy Center - the same group Elliott cited in her campaign study.

And while we are talking taxes, you should read the story in the Arkansas Democrat today on Elliott's apparent problems paying her own taxes.  She eventually paid them but taxes can be awfully confusing.