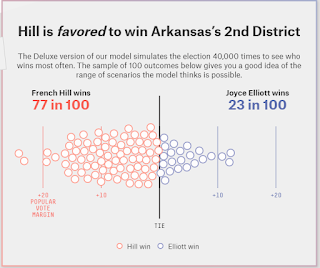 One of my favorite political sites is the FiveThirtyEight blog which analyzes polling data.  It was a project started by Nate Silver in 2008 and become one of the best tools to understand what all the different polls are telling us.  The website is the perfect intersection of my political junkie and numbers nerd personalities. They have been forecasting the Presidential race and a few weeks back added the U.S. Senate races. This week they greatly expanded by adding their forecasts for the U.S. House.

Predictably, the closest race in Arkansas is in the Second District race between Republican incumbent Congressman French Hill and Democratic challenger State Sen. Joyce Elliott. In the other congressional races, the Republicans all have a greater than 99 percent chance of winning.

Their methodology simulates multiple election scenarios to see who wins most often based on their data.  In their analysis, Hill wins 77 percent of the time while Elliott wins 23 percent of the time. Note - this does not mean Hill will win the election by 50+ points rather it means he is about three times likely to have more votes than Elliott.  Their trend lines do show the race continuing to tighten with an possible outcome of Hill 52.8% to Elliott 47.4%.

This feels about right.  Hill seems likely to win but the race is close.  According to Roby Brock over at Talk Business, we will get another look at this race before election day.

"We will have new statewide and CD2 polling the weekend of Oct. 17-18. We’ll be in the field next week," tweeted Brock today.

A Talk Business poll last month showed a close race with Hill in slight lead 47.5% over Elliott with 46%.  A couple Democratic funded poll since then have also showed the race essentially tied.  Republicans have not yet released any internal polls but admitted the race is close.