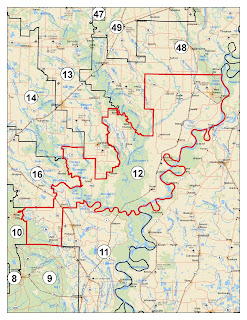 The ongoing saga in Arkansas House District 12 took a turn toward the Republican candidate David Tollett today when Circuit Court Judge Mackie Pierce ruled that Democratic candidate Jimmie Wilson is not qualified to serve as a State Representative.

The ruling is from a re-filed case by Republican Party of Arkansas.  A recap is linked here on the previous events but the summary is that an attorney friendly to Arkansas Democrats filed and lost an inept case challenging Democratic candidate Jimmy Wilson.  The Supreme Court agreed with the lower court decision but allowed the case to be refiled.

The Republican Party of Arkansas apparently had much better lawyers as they won their case today.

While the Court granted the petition to prohibit any counting of voter for Wilson and prohibit his certification as the elected Representative, it did stay the order pending an anticipated "immediate" appeal from the "Democrat (sic) Party" to the Arkansas Supreme Court.

“David Tollett, Superintendent of the Barton School District, will become the first Republican to represent Phillips County and District 12 in the Arkansas General Assembly since Reconstruction," said Republican spokesman Seth Mays. "Judge Mackie Pierce was correct in ordering Jimmie Lee Wilson not qualified to serve. The Democratic Party of Arkansas should never have nominated him in the first place, let alone defend him through the court system. Their own research said as much. Representative Tollett will serve the citizens of District 12 with integrity in the Arkansas House of Representatives and will stand strong for the values of the Arkansas Delta.”

I am thankful that the judge ruled in our favor today," said Tollett. "I look forward to representing all the people of district 12 whether they voted for me or not. It's finally time we move District 12 forward."

This one is a pick up for Republicans...for now.