One area that does have some competitive races is in central Arkansas where the very active Second Congressional District race between Congressman French Hill and State Sen. Joyce Elliot is turning out voters on both sides on the aisle.  Several house candidates are feeling the impact of the Congressional race.

"At the end of the day, there probably won't be much change in the Arkansas House. If there is, it'll be an overperformance for Democrats, having a net gain thanks to the battles for the suburbs in Little Rock, or maybe they flip the seat in Rogers, which is also trending toward them," said Nuttycombe.

Rep. Sorvillo (R) v. Hudson (D) - District 32 - Rated Flip R to D - The most likely district to filp is west Little Rock district 31 where Republican incumbent Rep. Jim Sorvillo is fighting off Democratic challenger Ashley Hudson.  Sorvillo won the seat in 2014 with 57% of the vote but has had to fight off a challenge every two years with the district tightening each time.  In his most recent race, he won with only 53%.  Little Rock attorney Hudson has raised over $100,000 has spent over $63,000 through September.  By comparison, Sorvillo has raised only around $41,000 and spent just under $20,000 but he held a cash advantage of $67,000 to Hudson's $40,000 due to his campaign carryover funds so he could tighten the gap down the stretch.

Rep. Brown (R) v. Cotton (D) - District 41 - Rated Tilt R - Rep. Karilyn Brown was elected in 2014 without a general election opponent but had a Democratic challenger in 2016 and 2018.  She built her lead in the 2018 from 54% to 57% and she has raised around $59,000 but through September has only spent about $7,000.  Democratic challenger Jannie Cotton is likely to benefit from Joyce Elliott's voter turnout effort in this North Little Rock district.

Rep. Lowery (R) v. Applegate (D) District 39 - Rated Lean R - This Maumelle district has leaned heavily Republican for the last few elections but has remained somewhat competitive.  Rep. Mark Lowery won the seat in 2012 with 52%.  He has won two re-election challenges with 54%.  He has raised over $20,000 but has over $66,000 cash on hand from campaign carryover funds.  Attorney Kayla Applegate has raised only around $18,000 with about $4,000 of that remaining.

Outside of central Arkansas, Nuttycombe predicts one other seat to slip - this time from Democrat to Republican in south district 9 where Republican Howard Beaty is predicted to unseat Democratic Rep. LeAnne Burch.  A couple close race in northwest Arkansas include Springdale district 89 where Democratic Rep. Megan Godfrey is battle Republican Josh Duggar (of the Duggar family fame.) And open Rogers district 94 where Rep. Rebecca Petty is not seeking re-election. Republican John Carr is trying to hold the district against Democrat Jene Huffman-Gilreath.

One other possible unexpected pick up for Republican is east Arkansas District 12 where the Democratic candidate Jimmie Wilson faced a court challenge over his eligible due to his previous federal crime.

If everything goes as expected, the House chamber will still be about three-fourths Republican.

Read more on Nuttycombe ratings on his website for not only Arkansas but many state legislative races across the county.  Here is his full Arkansas map below. 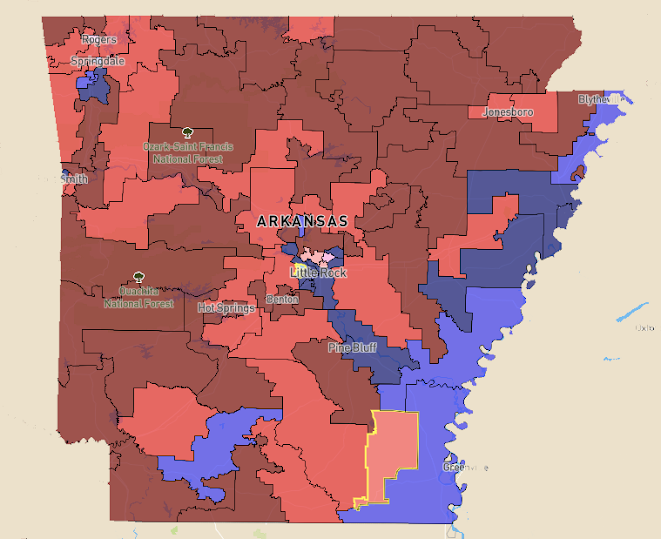