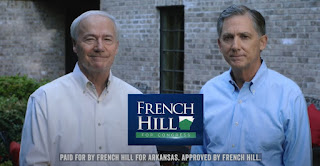 A smart move from Congressman French Hill's campaign this week as they rolled out a new ad featuring Arkansas Gov. Asa Hutchinson front and center.

"Before I was governor, I served in Congress and I know what it takes to serve in a broken Washington," says Asa in his trademark pronunciation.  "French Hill gets it. And that's why I rely of his leadership in Congress.  French has been in the trenches with me battling this virus from the start.  It was French that helped get us the critical funding we needed to save lives and jobs."

The backdrop here is the latest Talk Business poll which showed 70% of voters in the Second Congressional District approve of  the governor's job performance compared to only 26% who disapproved.  Compare that with President Trump which the same poll showed him trailing Joe Biden with 45% Trump to 49% Biden.

I would look for more ads (hopefully) from Hill arm and arm with Asa in the coming weeks.  If Hill holds on and wins, Asa will be the reason not Trump.

Also noteworthy today was Asa distancing himself from President Trump someone following the (un)Presidential Debate.

"As I watched last night’s debate, I was reminded of the importance of civil discourse in our society and of the wise words of William Wilberforce. As an abolitionist and member of Parliament, he strove for respectful discussion, even on the most challenging issues," tweeted Asa.