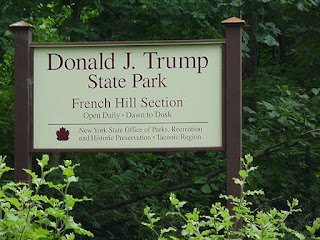 I noticed a funny little detail within the bombshell news yesterday from the New York Times on President Trump taxes...or lack there of.  The NYT obtained copies of the long sought after Trump tax returns and as many had guessed they showed Trump paid very, very little in federal income taxes in the last couple decades.  He only paid $750 in taxes in 2016 and 2017 and nothing in taxes for 10 of the last 15 years.  In 2010, he got a $72.9 million refund.

How exactly does someone pull off such a feat?  I would love to see the actual returns to give you full answer but I can you that there are a variety of tax deductions that can be used to reduce an individual's tax liability.  And a high net worth tax payer can get aggressive with these deduction.

A perfect example in the French Hill Section of New York's Donald J. Trump State Park. And yes, it really is called the "French Hill" Section.

According to an article from Time, Trump bought 436 acres of undeveloped land in upstate New York in 1998 for $2.75 million in hopes to turn the land into yet another of his golf courses.  But when this did not pan out, he decided to donate the land to the state of New York for a tax write off.  The charitable donation was listed by Trump 2016 campaign as being valued at $26.1 million.

It is unclear if $26.1 million was the amount Trump claimed as his charitable deduction.  Maybe we will get a better look if we can see the actual filings.

The "French Hill" section was abandoned in 2010 and is now little more than a sign, a parking lot, and overgrown trees and brush.  The name has nothing to do with our Republican Congressman French Hill (instead it separates it from the "Indian Hill" section) but it is too funny not to mention.  Hill is locked in a tight race and today there are reports that the DCCC is about to spend some money helping Elliott.