The Pulaski County Election Commission had an meeting last week...well...interesting in terms of how interesting election commission meetings normally are.

Pulaski County Deputy Clerk Jason Kennedy gave a report on absentee ballot applications to the Commissioner noting that they had received 9,320 applications so far - an increase of about 300% from the previous general election.  Over 7,000 came in the last two months with hundreds received everyday.  This is understandable with the COVID-19 pandemic and concerns over this being permitted as a reason to request an absentee ballot.  Additional staff is being hired to deal with the additional work load of verifying applications and prepare to send out absentee ballots.

The interesting portion of the meeting takes place from questions from Commissioner Kristi Stahr who asked about the process of verifying the application and how many had been rejected (around the 48 minute mark in the linked meeting).  Kennedy reported that out the 9,320 applications - no ballot applications had been rejected.  Three applications showed that the applicant was not a registered voter and they have notified them and sent voter registration forms to these but other 9,317 had a 100% verification rate.  Curious how this was possible, Stahr pressed a bit harder and got this interesting answer from Kennedy.

Kennedy explained that they are verifying name, address, date of birth but not all the signatures.

"We are looking at (the applications) as best we can and have not found anything really outrageous.  The vast majority of the people who are applying are older and we do not have a signature on a lot of their files," said Kennedy.

Kennedy referred Stahr to some sort of grandfather principle.

"There is a goodly number of people who are registering for absentee ballots that are grandfathered into the system which means they have been registered voters since before you or I were born. And yes we do not have signatures on file for many of them," said Kennedy.

Stahr replied that she "cannot find the law grandfathering in applications without signatures."

I have asked the Pulaski County Clerk to help clear this up and also explain exactly how many of these applications they were not able to verify signatures as required by law.  I will let you know if I hear back.

Some context here is that Pulaski County is one of the strongest Democratic counties in the state and the strongest in the Second Congressional District where Republican Rep. French Hill is being challenged by State Sen. Joyce Elliott in about the only semi-competitive race in the state.  The Pulaski County Clerk's office is headed up by Democratic Clerk Terri Hollingworth who was one of only seven Arkansas delegates for Joe Biden at the recent Democratic National Convention.

Stay tuned to this one.  It could get interesting.  Although the County Clerk receives and mails out absentee ballots, the election commission - which is made up of majority Republicans - actually makes the determination if the ballot is valid and should be counted.  If signatures are not being verified to the Commissioner's sanctification, this could lead to a showdown.

UPDATE - I heard back from Pulaski County Treasure Terri Hollingsworth today who tells me that as of September 3 their office has verified 10,698 absentee ballot applications and have only had issues with 10 applications.
"Of the absentee ballots applications received, all but ten individuals have been placed in absentee status. Of the ten applicants, four did not have signatures on file, but all have been registered since at least 1980 and all were born on or before 1943; five are not registered voters; and one application had a signature mismatch.  They have all been sent a notice and new Arkansas Voter Application," said Hollingworth.
These applications are roughly three times the total number of application in previous elections.  In 2018, Pulaski had 3,624 absentee ballot applications with 2,439 returned.  In 2016, there were 2,439 applications with 1,070 returned.
For comparison, I also checked with the Saline County Clerks office who told last week they while there are up it is not as dramatic of an increase as Pulaski. The Saline Clerk's office received 1,673 applications through August 25 compared to a little less than 1,000 total in 2018 and less than 500 in 2016.  In their verification process, they report having issues with around 25 applications.
UPDATE II - Responding to a question from Pulaski County Election Commissioner Kristi Stahr, Hollingsworth wrote to the Commission in a letter dated September 30, 2020. Absentee ballots requests are up to 17,906 as of close of business September 29.
The letter explains the earlier statements on the signature verification saying...

431 absentee applications for this election did not contain signatures in the statewide voter database, 415 of those application were verified using the county's voter registration records. After completing the verification process, the signatures on sixteen (16) applications could not be verified.

It is a much different answer than Kennedy gave when he said there were a "goodly number" of applications without signatures on file to match.  Sound like Kennedy either misspoke or the Clerk's office found another to verify after questions arose. 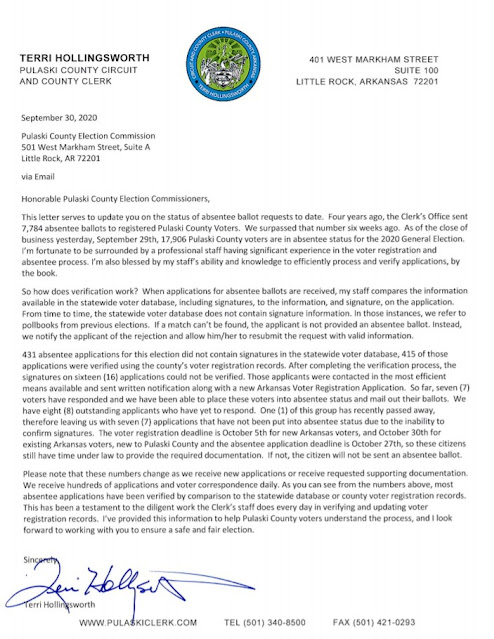 and this is only Pulaski County having a situation, can you imagine all the cities in America doing this? We are in for HUGE showdown with MEGA problems in the upcoming election.