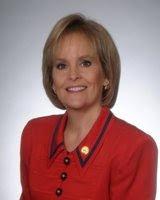 There is one interesting twist on this story; the bill was originally on the agenda for Thursday morning but according to ARTL director Rose Mimms, they decided not to run it because, “too many of the members who support it were not in committee for one reason or another.” Without these members present, they did not have the votes to pass the bill. The bill’s primary sponsor is Rep. Dawn Creekmore (picture above) who was rumored to break with her Democrat colleagues and a vote against the tax increase on tobacco, HB1204. However, when the tobacco bill came up for a vote on Thursday afternoon, Creekmore cast one of the deciding swing votes to reach the 75 votes needed for passage. Although I wish Creekmore had voted against the tax increase, I hope that she will be rewarded for her vote by a smooth passage of the partial birth abortion ban. Her Democrat colleagues should realize she came through for them on a difficult vote for her, now it is their turn.
Posted by Jason Tolbert at Friday, February 06, 2009

I am reading alot between the lines in that story. What are you really saying?

1. My advice is don't count too much on Roy "Tax and Spend" Ragland's vote until you find out how the leadership wants him to vote on this issue. He will get his running orders from old Robbie and until he does, his word about how he will vote doesn't mean spit.

2. Poor Dawn Creekmore. Run over by the House Leadership and St. Beebe. She was warned that unless and until she folded like the cheap suitcase she really is, her bill would not see the light of day out of committee. I have to say this, at least she gave in for the right reasons, as opposed to Tax and Spend Ragland. At the same time, she caved and refused multiple requests to have a press conference and come clean on the why's of her renig on the promise to vote against the tax.

All of the Dawn Creekmore excuses in the world will never relieve Tax and Spend Ragland's vote FOR A HUGE TAX INCREASE. Simply put, his no vote and the TAX INCREASE would have failed. He managed to put them over the top and make sure that we TAXED THE HECK out Arkansans. Thanks Roy. Run for Lt. Gov. PLEASE. Some of can't wait.

Ah Cameron! So I was correct in reading something between the lines in that story. I wonder if a certain conservative blogger will get to the bottom of this, or just let it fade into the past.

Ragland was at the Senate Agri Committee presenting a bill. Check the official legislative calendar.

Thanks for the comment but I never said Ragland was the one absent, so you must be quite the insider to know this. Besides, as Chairman of the Agri Committee, I believe Ragland could have scheduled his bill to run anytime he wanted.