Speculating on what Republicans may run for office a year from now is usually a task reserved for crazy right wing bloggers like Kinkade and myself. But for some reason the left leaning blogging crowd has entered the mix. Brantley, commenting on state Sen. Gilbert Baker’s vote against the tobacco tax increase on Thursday said, “He is still thinking about a challenge to U.S. Sen. Blanche Lincoln in 2010.”

Brummett read this and did the unthinkable for a blogger; he called him – and on the phone no less! No checking his twitter account, no reviewing the scheduled speakers at the Central Arkansas Young Republicans luncheon. Brummett is so old school. Anyway, Baker tells him that National Republican Senatorial Campaign Committee has approached him about running but that he is really focusing on his work in the legislature right now. Brummett paraphrases Baker to say “Unlikely, but not absolutely not.”

So let’s review. So far Republicans (in no particular order) Tim Griffin, Tom Cotton, Rick Calhoun, French Hill, and Gilbert Baker are all rumored to be thinking of mounting a challenge to Sen. Lincoln. Of course, all of them have been approached by other people begging and pleading for them to run but none of them have been talked into actually doing it…yet!

But Republicans are not the only ones thinking a making a run against Blanche. Whispers around 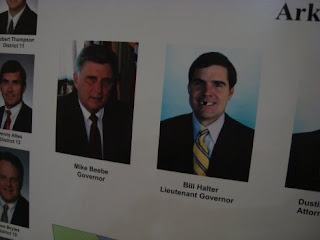 the capital are saying that the Lieutenant Governor Bill Halter (photo from Lance Turner) might be catching the Senate fever as well. Word is that the Union Bosses are keeping an eye on Lincoln's vote on card check legislation. If she votes against them, they will put their support (and money) behind Halter for a primary challenge. Of course, all this could just be state legislators expressing their admiration for the job that they think Halter is doing and their desire to see him leave the state capital building for bigger and better things.

Either way, 2010 should be a fun year for Arkansas politics!
Posted by Jason Tolbert at Saturday, February 14, 2009

Two whole days without a blog post? What the matter, you run out of Ritalin?