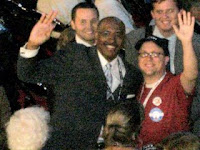 Today, the Republican National Committee will meet in Washington, DC to elect their officers. Even though the candidate I had supported, Chip Saltsman dropped out of the race on Thursday, there is still no consensus on who will win. The Washington Post’s blog The Fix has a good wrap up of where the candidates now stand. According to them, current Chairman Mike Duncan has the most committed votes at around 50 or 60; however, as the incumbent this means over 100 members of the Committee are looking for a change. Conventional wisdom is that Michael Steele, the outspoken charismatic GOPAC Chairman from Maryland, is close behind him. Saul Anuzis, as GOP Chairman of Michigan, and Katon Dawson, as GOP Chairman of South Carolina, also have a good deal of support and as RNC members themselves have an inside connection.

With Saltsman out, my personal favorite is former Ohio Secretary of State Ken Blackwell although he reportedly has the least support on the committee. I guess I just like an underdog. Blackwell has impressed me the most both with his presentation at the forums over the past month and with the endorsements he has received from people I respect such as James Dobson. Although Blackwell seems to be the favorite of Social Conservatives, unfortunately that has not translated into support on the Committee.

On the Arkansas front, RNC members Jim Burnett and Reta Hamilton are firmly in the Mike

Duncan camp. As long time Party loyalists, this is not surprising; Duncan has been their man and they are sticking with him. Reports are that they are not only voting for Duncan but are working to convince other RNC members to vote for him as well. On the other hand, Arkansas Chairman Doyle Webb told me personally that he has not committed to anyone yet and is going into the meeting with an open mind.

Either way, we will all know one way or the other by Friday afternoon. With 85 votes needed to win, it is doubtful if anyone will win on the first ballot, unless some backroom deals are made in advance. The thing to watch on the first ballot will be how close can Duncan gets to the 85-vote mark. If he can get within 20 votes are so, then look for a deal or two to put him over the top on the second ballot. Otherwise, he will have a tough time convincing members looking for a change to switch their vote to him. The more rounds the voting last, the better the chance for the underdogs.


We will be watching this tomorrow with our Arkansas blogger in the field, K. Ryan James. (photos from his blog) He will be posting updates on his blog and via twitter. Even though Duncan seems to have the edge, I will be cheering alongside many grassroots activists that the RNC will vote for a change.

UPDATE - It looks like C-SPAN will be carrying the meeting and vote this morning. I will try to

listen and update this on my twitter account.
..
UPDATE II - 10:50 AM CST - The first ballots have been cast and are now being counted. We will know the result soon. Will there be a winner or will there be more ballots? Most are saying more ballots.
...
UPDATE III - 11:05 AM CST - First round results are Duncan 52, Steele 46, Dawson 28, Anuzis 22, Blackwell, 20. Since no one recieved the 85 votes needed, there will be another round!
Only 52 votes is a low number for the incumbant Mike Duncan. He could be done!
....
UPDATE IV - 11:45 AM CST - Second round done. Ballots being counted. Tons of rumors of deals being made.
.....

UPDATE IX - 2:05 PM CST - Ken Blackwell withdraws and endorses Michael Steele before the fifth round of voting. Will it be enough to put Steele over the top? Probably.
.........
UPDATE X - 2:25 PM CST - Fifth Round results - Steele 79, Dawson 69, Anuzis 20. Immediately after the results were announced, Saul Anuzis says "That's Saul folks!" and withdraws but does not endorse.
It will be decided in the next round with either Michael Steele or Katon Dawson.
..........
UPDATE XI - Michael Steele is elected the new Chairman of the Republican National Commitee by a final ballot vote of Steele 91, Dawson 77!
Here is his acceptance speech...
Posted by Jason Tolbert at Friday, January 30, 2009