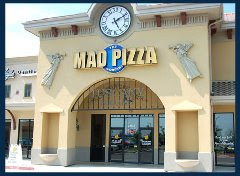 It is never to early to start discussing the rumors of who may be running for office in 2010 as the Tolbert Report has shown with the breaking news of Tim Griffin’s possible Senate run as the Republican challenger to the incumbent Blanche Lincoln.

The rumors are now starting to float around the possible Republican challenger to incumbent Lieutenant Governor Bill Halter. As of this posting, I have actually heard three names mentioned, although two of these names are not confirmed enough to warrant posting. However, according to sources inside the Republican Party as well as people connected to the potential candidate, Mark Darr has begun the initial stages of preparing for a campaign for Lieutenant Governor.

Darr is a 35 year old resident of Springdale moving recently from Little Rock to open The Mad Pizza Company. Darr also is part owner of Larry’s Pizza West on Highway 10 in West Little Rock. If you have ever eaten their pizza that alone should be enough to get your support (it’s good!) but he also is a family man, father of two and married to an elementary school teacher, sells insurance, and is an active member of First Baptist Church Springdale (he even sings in the choir.) In the interest of full disclosure, I went to college with Mark years ago at Ouachita Baptist University and have heard from numerous sources that he is seriously discussing a run for Lieutenant Governor. As a political new comer and a small business owner, Darr would bring a fresh perspective to the office. He has spent the last few weeks traveling around the state to visit with people to determine his level of support.
Posted by Jason Tolbert at Friday, January 23, 2009

Mark's politics must have run to the right after graduation to be a republican now. At OBU he as a little to the left of most people I knew, but then again, it was Ouachita. If I was in AR I would campaign and support him!

He has announced he is running