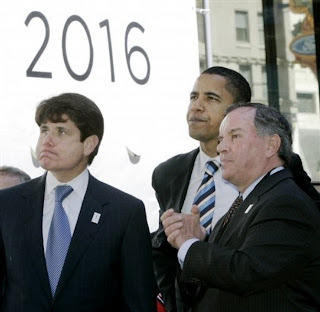 There is some breaking news this morning out of Chicago. The AP is reporting that Gov. Rod Blagojevich was arrested for selling the newly vacated U.S. Senate seat of Barack Obama. Gov. Blagojevich also threatening to withhold state funds to the Chicago Tribune for articles they wrote critical of him. Something tells me he will not be success in stopping the critical articles.

I know it is very difficult to believe that political corruption would come out of the city of Chicago but according to the 78-page FBI affidavit, it’s true. The real question is how long will it take for President Elect Obama to throw his friend under the bus and distance himself once again from one of his associates.
Posted by Jason Tolbert at Tuesday, December 09, 2008