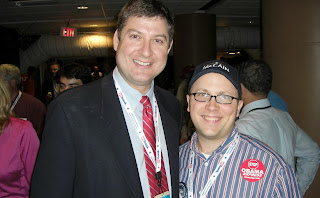 I was able to participate in a conference call today that Chip Saltsman set up for bloggers. These blogger calls were a staple for the Huckabee for President Campaign, and I am glad Saltsman is continuing the practice for his RNC Chairman Campaign.

Saltsman discussed his extensive resume for the job including his successful campaign in Tennessee to defeat Al Gore in 2000 and even against Republican Governor Don Sundquist's state income tax proposal. I asked Chip how his extensive online grassroots campaign including his Facebook group and launch of ChipSaltsman.com tied into a campaign to appeal to only 168 members of the Republican National Committee. Saltsman said that this was “an opportunity to get everyone in the game” and that it was “important to get everyone involved.”

There were several other interesting questions posed included an interesting discussion with Alexander Burns of the Politico where Saltsman had a friendly disagreement with his column from yesterday. Saltsman also said the while he was proud of the 13 months he spent working for the Huckabee Campaign, it is only part of the resume and does not define who he is.

He also responded to a question about the proposed automakers bailout. He noted that he was proud of his Senator Bob Corker’s tough questions and went on to say that the government “should not be in the business of bailing out automakers. It is not on the list of things the government should be doing.”

In other RNC Chairman news today, GOPAC Chairman and RNC Chairman candidate Michael Steele discussed the need for the GOP “to elect moderates in the party.” Steele went on to discuss the need to reach out to moderates saying, “There are a lot of people who would join us and be a part of our efforts who are pro-choice.” Thank you, Mr. Steele for reminding me why I support Chip Saltsman instead of yourself.
Posted by Jason Tolbert at Monday, December 08, 2008