After seeing this photograph from the Arkansas Times of Attorney General Dustin McDaniel at a fundraiser for Arkansas Families First, the group formed to oppose Initiated Act 1, I decided to go down to the Arkansas Ethics Commission on my lunch break and take a look at their financial disclosure statements. My hunch was right.

The McDaniel Leadership PAC contributed $1,000 on October 28, 2008 to support Arkansas Families First in their campaign against Initiated Act 1. According to the PAC’s filing with the Arkansas Secretary of State, Dustin McDaniel serves as chairman of this PAC. (As a side note, fellow blogger Blake Rutherford serves as the treasurer.)

This is significant because as the Attorney General for Arkansas, McDaniel’s office now serves as the defense attorney in representing the state of Arkansas against the ACLU’s court challenge of Initiated Act 1. McDaniel’s Chief Deputy Attorney General Justin Allen told the Associated Press yesterday that his office will still be the ones defending the lawsuit.

I cannot help but wonder how someone who has contributed financially for a measure’s defeat can now be the advocate for the people of Arkansas in defense of that passed measure. I am certainly not a lawyer but referring to a borrowed copy of Howard Brill’s “Arkansas Professional and Judicial Ethics,” this appears to be a violation of Rule 1.7 defining a conflict of interest. The rule states “A concurrent conflict of interest exists if …. there is a significant risk that the representation of one of more clients will be materially limited … by a personal interest of the lawyer.”

Is this circumstance not a clear example of this definition? The rule goes on to discuss several requirements for a lawyer to overcome this conflict including if “each affected client gives informed consent, confirmed in writing.” The clients in this case would be a people of Arkansas, particularly the 586,248 Arkansans who voted for the Act. I am not sure how McDaniel is going to pull that one off. 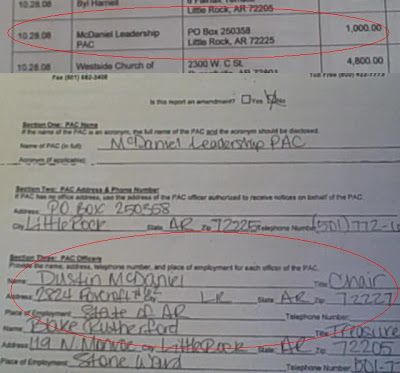 UPDATE II – McDaniel tells the Associated Press on Friday afternoon that he will not recuse himself from the defending the Act he gave money to defeat. (Note - I attempted to contact the Attorney General on Wednesday through his chief of staff when this story was posted but have still not heard back.)

UPDATE III – McDaniel also visits with Max Brantley of the Arkansas Times. It looks like he is visiting with the entire state expect for the guy who broke the story (me)!

McDaniel tells the Times, "I don’t see any reason why we would not be able to vigorously and diligently defend the constitutionality of this act despite the fact that I opposed it on policy grounds. As long as you have the attorney general being an elected official, political issues are going to be out there [on which] people want to know where you stand. People have a right to know where you stand on the issues. I don’t in any way regret the statements that I made before the election."

It is not the statements you made Mr. McDaniel; it is the contributions that you gave. In defending the Act, you are engaging in behavior that an attorney in public practice could not do.

Very good information. I think the people of Arkansas should know which politicians are speaking out of both sides of their mouth.
Mark Darr