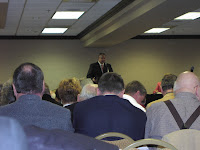 I am live from the state Republican Party of Arkansas meeting at the Holiday Inn in downtown Little Rock.

Dennis Milligan opened the meeting by thanking the party for allowing him the privilege of serving as chairman for the past 19 months. He highlighted the successes that the Republicans saw during the past election cycle including gains on the county level in JP races and county officials as well as picking up three house seats in the legislature. 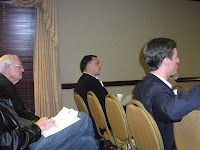 Rachael Davis, President of the College Republicans, nominated Joseph Wood for Chairman. The Republican Party needs change and needs a fresh face. Wood would help attract much needed young voters to the party. Rep. Mark Martin seconded the motion. Martin said this is a key opportunity for the party with two great candidates. 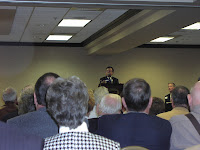 The meeting had a special forum for both candidates to speak. Doyle Webb spoke first. Webb said the two top priority for the party should be better communication across the state and better organization with the county parties. We have got to go back to the basics and learn how to "block and tackle." Webb will be setting aside his law practice to work full time as chairman.

Wood says his two priorities will be to connect and compete. We first have to connect with people across the state and bring in all the different groups. Then we can compete around the state. Wood says he will not serve as a paid chairman.

Wood said that the RPA must raise at least $475,000 to meet our budget requirements but he would like to see the party at least double that amount in fundraising. We need to, not only focus on large donors, but also recruit new small donors from people like Joe the Plumber.

Webb agreed that we have to raise about $500,000 to stay afloat and the buck stops with the chairman. The chairman is responsible not only for raising this money but for raising money for candidates. The RPA must be careful not to compete directly with the candidates for the same funds.

Webb says he will be active in recruiting and evaluating candidates. We will have a recruit committee but as chairman he will be seeing these candidates personally as well. Wood says that he has over 20 years of recruitment experience through his work in human resources. He said he will work through the local official to help find good candidates.

Wood says that the most recent elections help demonstrate that Arkansas is a Republican state. He discussed his own history of switching from a Democrat to Republican growing up in Chi 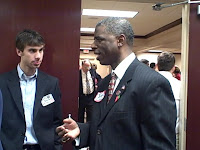 cago after he realized that he identified with the principals the Republicans stand for. He said he was a Republican because someone to the time to reach out to him to help educate him about what Republicans believe.

Webb said that the party must do a better job talking about what our Republican values are as we interact in our community. Webb pointed out that Arkansas overwhelming voted for the conservative candidate in the most recent Presidential election. 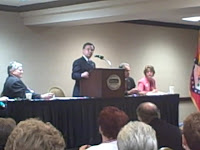 or out on the field. He said that he would like to be paid but he is willing to accept whatever the party is able to pay. If the executive committee decides that do not have a dollar, then he will take 50 cents.

Wood said he is not looking to be paid but he will do whatever is required by the job to commit, connect, and compete. He is wanting the spend time working with young republicans and looking at new ways to connect through the new media.

The two candidates then delivered closing remarks. Wood talked how we can work together to build a great party. He talked about the fact that he was adopted and he had life because his mother choose life; this is one of the reasons he is so committed to this issue. 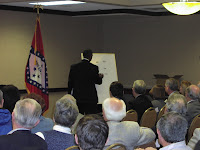 Webb agreed with Wood on uniting the party. He says that he is looking forward to working together with everyone in the party including Wood.
The forum concluded voting began. Sen. Gilbert Baker spoke while the votes are being counted. As spoke about the benefits of the two party system and the importance of having both sides discussed.

Dennis Milligan announces Doyle Webb is the new chairman of the Republican Party of Arkansas. See Video above of Webb’s acceptance.

Duane Neal was elected First Vice Chairman with no opposition.

Anne Britton and Robin Lundstrum were both nominated for Second Vice Chairman. Lundstrum won. Rep. John Boozman spoke while votes were being counted.

Jennifer Parks elected Secretary with no opposition.
UPDATE - David Sanders reports (via twitter) that the vote was close with 52% Doyle Webb and 48% Joseph Wood. Doyle Webb was the favorite going into the election so the close vote show how impressive Joseph Wood is. He definitely has a future in Arkansas politics.
Posted by Jason Tolbert at Saturday, December 13, 2008