One Day Long Even Year Sessions 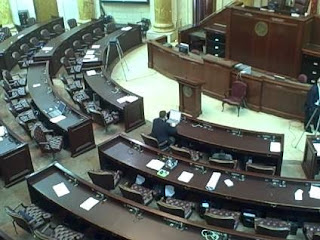 In spite of passing with about 69% of the vote, no one seems to like the idea of annual sessions. The lone exception may be David Kinkade who is salivating at the chance of twice the scandals and gossip for his blog, The Arkansas Project. This makes me wonder what would have happened if more legislatures had spoken out against the amendment before the election. Except for the never shy Dan Greenberg, I do not remember hearing much opposition from legislators until it already passed.

But now that it has passed, the new legislature has the task of complying. This first two year cycle will be important as many times tradition and precedent set the house rules for the future years. Rep. Steve Harrelson, seen blogging alone in the House Chamber in the picture above, reports on a proposal that some legislatures are tossing around that could limit the even year session to a little as one day. The suggestion is to continue conducting the odd year session as normal including the consideration of a biannual budget with only one year of actual funding. Then, assuming no new issues have arisen, the legislature could meet in the new even year session and officially adopt the second year of the biannual budget. This is certainly an interesting idea that will be something to pay attention to. Since it appears to have peaked the interest of the majority party leader, it seems that it could get some traction.