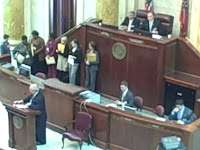 The Arkansas House of Representatives met this afternoon to choose leaders and pick their committee assignments. Shortly before breaking for lunch, Rep. Robbie Wills was elected as the new Speaker of the House, Rep. Steve Harrelson was elected the Majority Leader, and Rep. Bryan King was elected Minority Leader.

After the lunch break, they reconvened and broke into Congressional District Caucuses to select committee assignment. I sat in on the 2nd (Central) District Caucus meeting. It was interesting to watch how this process works. It reminds me a lot of little league coaches drawing for players on their team. The members take turns making their selections for the various committees in order of their

seniority. Because of the current three terms limit, there are basically three levels of seniority with the seniority drawing determining the order within each level. Newly elected Saline County Representative Ann Clemmer (R-Bryant) chose Judiciary for her first choice and the Aging and Legislative Affairs for her second choice, while Representative Barbara Nix (D-Benton) chose Public Transportation and City, County, and Local Affairs. However, I was warned that many times these picks change before the final assignments.
Posted by Jason Tolbert at Friday, November 07, 2008