Conference Call with Gov. Mike Huckabee on his book “Do the Right Thing” 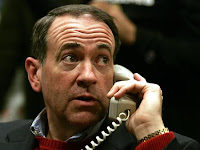 I participated today in a blogger conference call with Gov. Mike Huckabee about his new book “Do the Right Thing” scheduled for release tomorrow. Gov. Huckabee called in from New York where he had just finished doing an interview with Sean Hannity’s radio show. These conference calls were a regular part of the campaign during the Presidential Primary so it was good to be a part of one again.

Gov. Huckabee told us that his book focus’ not on the past but on the future and how we get where we need to go as a party. Gov. Huckabee’s central message is that the government cannot cut taxes and lower the size of government unless the American people become responsible citizens and begin to “do the right thing” (hence the name of the book).

Gov. Huckabee spent most the call addressing questions from the participating bloggers. I took my turn to ask Gov. Huckabee to respond to the articles from Time and Politico which focus on his criticisms in the book particularly criticism of some the leader of the religious rights and fellow opponents Mitt Romney and Fred Thompson. Gov. Huckabee said that the book does not focus heavily on these topics and “hopefully people will read the book for themselves” and see this. These articles pulled the most controversial passages out of the book and do not represent the book as a whole. He did say that the book does “get specific about things that took place during the campaign” and talks about these things with “some degree of candor”. He pointed out that over the course of the campaign people have come to know him as “someone who shoots straight” and if he had not been candid, it would have seemed “disingenuous.” He commented that he felt Michael Scherer was “pretty fair in his assessment” of the book in the Time article and that there are certainly portions of the book that people will disagree with but it is the facts of what actually took place. However, he holds that the overwhelming focus of the book in “an encouraging and uplifting story of how ordinary people overcame great odds” in his Presidential campaign.

I know am looking forward to reading the book. I plan to buy it tomorrow and will put my thoughts on it as soon as I have finished reading it.
Posted by Jason Tolbert at Monday, November 17, 2008