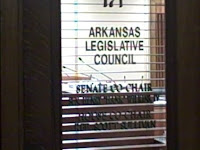 I peaked in today on the Arkansas Legislative Council Joint Budget Committee. It was not the most exciting meeting of year but I did hear the budget presentations from Lieutenant Governor Chief of Staff Michael Cook, Secretary of State Charlie Daniel, and Attorney General Dustin McDaniel. McDaniel’s presentation (video below) was probably the most interesting. During the presentation, he touched on the economic downturn, the need for increased security after the attack on Bill Gwatney, and made some inside jokes (one about Rep. Chris Thyler making a death threat against him) that I did not get but most of the legislatures thought were funny.


I also had a chance to visit with Rep. Bruce Maloch about his sponsorship of HB 1002 dealing with the state lottery. I introduced myself and he laughed and said “Oh, I know who you are!” I am not sure what that means or if it is a good or bad thing. [Note - Rep. Maloch was nice enough to email me to let me know "It was not a bad thing!"] He told me he co-sponsored the lottery bill, inspite of his opposition to the lottery, so that he could help ensure that it had the appropriate regulations and oversight. He went on to say that he hopes the scholarships awarded through the program will be need based scholarships since he believes the lower economic group will be the most negatively impacted by the lottery itself.

So far, the lottery bill is still the only one filed in the house; however, the senate saw a flurry of bills pre-filed today. The award for first bill filed goes to Sen. Bobby Glover who introduced SB 2 which would provide tax relief to self-storage facilities beginning in 2011 but only if there is a surplus. Sen. Glover also pre-filed SJR 1 that proposes a constitutional amendment to the ballot extending the terms for most all county officials to four year and prohibiting them from running for the legislature while in office. Sen. Denny Altes filed ten bills primarily dealing with tax relief for education expenses, including the popular SB 12 which would provide a back to school sales tax holiday. Sen. Jimmy Jeffress filed five bills dealing mainly with bail bonds; I have no idea what the story is there.
Posted by Jason Tolbert at Wednesday, November 19, 2008