The Arkansas Project reports that Senator Gilbert Baker will be hosting a press conference at 3:00 at the Faulkner County Republican Headquarters to respond to “an illegal political attack launched by his opponents today.” Conway is a bit out of my coverage area but hopefully I can find some coverage for more details after the press conference

UPDATE - It looks like the "illegal political attack" has to do with a mailer implying that Sen. Baker received special treatment from UCA in return for funding. Here is the mail piece. 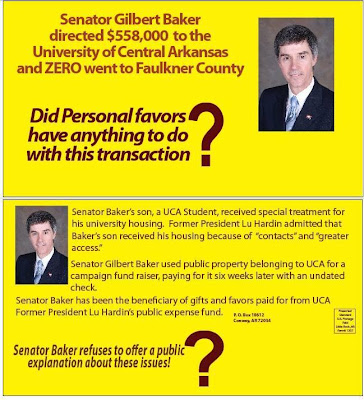 It really looks like White is reaching with this one. From what I understand, the "public property belonging to UCA" was a tent which Baker borrowed and later paid for. As for the "gifts and favors" that is so general it could be as minor as taking him to lunch and the "special treatment for his (son's) university housing" could be as little as getting him his first choice of dorm selection. White either needs to further explain these general charges with the details or apologize for this hit piece.

Also, Max Brantley adds to this on the Arkansas Times Blog. In defending White's mailpiece, Brantley points out that the mailpiece does not identify "Paid for by the Joe White for Senate Campaign" which Brantley speculates is why Sen. Bakers calls the ad illegal.

It's interesting that Senator Baker would be so upset about adds that are not approved by a politlcal campaign. I mean, he knows all about that sort of thing. The man directed $167,000 to the Coalition for Arkansas
Future, which used the money to levy false attacks against Mike
Beebe, Preston Scroggin, Eddie Hawkins, and Lance Reynolds.

Later, he admitted to the attacks and apologized to Governor Bebee. Oh, sweet hypocrisy!