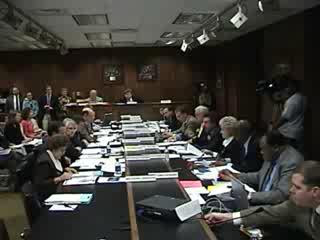 Believe or not, but the picture above could help decide the outcome of the State Representative District 67 Race. The picture is the exact moment that the House Judiciary Committee allowed Senate Bill 959 to die. SB959 was the bill which would have banned homosexuals and cohabiting couples from adopting or being foster parents. The bill easily passed the Senate with 20 votes and only 7 votes against the bill. But the House Judiciary Committee killed the bill by failing to return it to the House floor to allow a vote. In picture above, the first seat on the left with the big stack of untouched papers is the seat reserved for Rep. Steven Breedlove as a member of the committee and it sits empty.

Why is this bit of old news important? It is because the recent statements made by Rep. Steven Breedlove regarding his role in this bill have voters in District 67 scratching their heads. Rep. Breedlove and his opponent John VanGorder have both issued press releases regarding this issue last week which lead to “The Tolbert Challenge.” Both candidates responded to my challenge but some of the things Rep. Breedlove said did not add up.

Breedlove claimed in his press release and again directly to The Tolbert Report that he supported the bill but missed the vote because he had to leave for a Bible study. Breedlove said in his press release, "The allegation that I helped kill legislation that would have prevented homosexuals from adopting children and serving as parents is an outright lie." He went on to tell me in an email, “I would have voted for it (SB959) this time, but I was on my way to a Bible Study that our church has once per month.”

I posted these statements earlier this week and began to receive a quiet a bit of feedback as to their accuracy. So I began checking out the facts. First, the committee hearing took on this bill took place on Tuesday morning, March 27. There was a vote later that afternoon when fellow Judiciary Committee member Rep. Jon Woods brought it back up for a vote. However, in reality, the bill died during the “Special Order of Business” called specifically for consideration of this bill. When the time came to move for the bill’s passage, Rep. Breedlove was not there to do it. The House record does show that Rep. Breedlove was in Tuesday’s House afternoon session casting several roll call votes, so he was at the State Capital that day but not in the House Judiciary Committee hearing.

Here is where the story begins to take some additional twists. The Tolbert Report obtained the audio of a radio interview that Breedlove gave to KWHN on July 16 of this year where a caller asked about this issue. Speaking about the morning committee hearing, Rep. Breedlove said, “We were all there; 100% of our committee was there when it was originally brought up.” This does not fit with the photo, video, and eyewitness reports showing that he was not present. So why make this claim?

Also in the radio interview, he discusses his absence from the afternoon vote saying, “When it was brought up a second time, I was on my way home to a home Bible Study that I have with our church, that we do every fourth Monday night.” The calendar on the church’s website where Breedlove serves as pastor confirms that the Bible study normally met on Monday night although the calendar for March 2007 shows the meeting on the Tuesday of the vote reading “7:00pm -8:00pm Home Bible Study @ The Dietz.” Perhaps Breedlove simply misspoke when making this statement in the radio interview, but this adds to the confusion. Although I still don’t understand why he could not have attended the afternoon committee meeting which was over by around 3:30 and still had over three hours to make the 170-mile drive down I-40 in time for the Bible Study.

Here is the radio interview…


Rep. Steve Harrelson, Democrat House Majority Leader and fellow member of the House Judiciary Committee offers another explanation to Breedlove’s absence. Harrelson told the Arkansas Democrat Gazette in a March 23 article before the committee hearing, "I think what you're going to see is a few people not vote or get up and walk out." The article goes on to explain that doing so is the same thing as voting against the bill as 11 of the 20 committee members had to vote for the bill for it to pass.

At the end of the day, there are still many questions that Rep. Breedlove is either unwilling or able to answer. Why did he miss this important committee meeting? If he supported this bill as he claims, why did he not make it a point to show up for this hearing and move for its passage? And now why the inconsistent excuses regarding his absence? I have posed all the questions to Rep. Breedlove with no response. The real question that remains will be answered on November 4. Will the voters of District 67 show up to vote and return Rep. Breedlove to the state legislature or will they chose someone else to fill his empty seat?

UPDATE - I just received the following response from Rep. Breedlove. His new claim is that he could not attend the Judiciary Committee Meeting because he was running HB 2538, which dealt with the employment of the family members of school board members, in the House Education Committee that day. I can’t find a record of this bill being discussed on March 27, the day of the hearing in question. The record shows the last action on the bill was on March 20 before it died still in the Education Committee when the session ended. I have asked Rep. Breedlove about this and if HB2538 was discussed on March 27; I will let you know what he says. 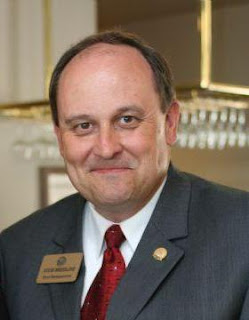 "If you are truly interested in knowing the truth about that day here it is.

As the morning went on, I was going back and forth across the hall to see where SB 959 and my bill HB 2538 were in the discussion. I never came up to the table in the Judiciary Committee room to sit down because I was only staying in the room for short periods of time and I did not wish to interrupt the discussion. Everyone knew within the Judiciary Committee that I was going to have to run my bill in the Education Committee if it came to the table. Being in and out of the room during the morning I could not have possibly called for the question.

We have a monthly bible study at our church which I am the leader. We have that bible study scheduled each and every fourth Monday of the month. That perticular month, we moved that date to Tuesday because one of our members could not attend on that Monday study so we changed the date to accomidate his needs. As soon as the General Session was over that day, I jumped into my car and headed toward Greenwood for our Bible Study. The trip usually takes around three hours, and the study began at 7:00, so when the session for the day was over at 3:00 I was able to leave the Capitol by 3:30 giving me three and one half hours to make the Bible Study. None of us knew at that time that they were going to call SB 959 back up in Committee that after noon.

I received a phone call about the time that I reached Russellville that they had called the vote back up. I asked what was the final vote, and I was told that only four Representatives had voted for the bill. Even if I had been there and voted for the bill, it takes eleven votes to get out of committee which would have ment that the bill would still have been six votes short of passing. My presence or lack there of did not in any way keep that bill from passing.

This just in! Rep. Breedlove's opponent, John VanGorder, has launched the following commerical dealing with this issue...

has anyone noticed breedloves partner in crime did a crime of his own AGAIN...yes, ken edwardss mayor of greenwood...he got caught steeling campaign signs....it..is also said that he is in possesion of a vangorder sign...claims it showed up in his yard...right!!...funny edwards is steeling signs and the only one he has in his front yard is a breedlove sigh....yes, breedlove and edwards are long time friends and they tagged teamed the tax payers with a back door political fraud.....called a meeting with 2 hours notice...only called those that they knew would vote for breedloves water dist plan...the city of greenwood already buys their water from james fork...now with the PLAN breedloves dist buys the water, markes it up, sells it to greenwood....greenwood get to pay higher rates for the same water....breedlove takes the profits and builds his precious water dist....he becomes the hero in the city of charleston which is a majority of dems....beautiful right, yes, ken edwards and steve breedlove just spent 20 million of the tax payers money to get breedlove re-elected, which one is the criminal???? both perhaps????

Mr. Breedlove digging his own grave, with his one lie and then another lie, he is as bad as his best friend Ken Edwards with the one story and then the other story...

anyway, aparently Mr. Breedlove took a wonderful event and tainted it by distastefully going on a partisan rant and in the mean time offended MANY public officals and citizens alike....the dedication of the new courts building was to be a proud day. Mr. Breedlove ignored all of those that actually contributed to the building and instead decided to brown nose the governer who had nothing to do with it, the building was in motion long before Beebe was gov.....Beebe chose Breedlove to speak, over many other public officals shows his partisan flag being waved as well....how discusting...distasteful, and just down right wrong, we SOOOOOO have got to get rid of this guy.......if we could just get rid of Edwards and Breedlove, Greenwood would be on the right tract.......who is with me....